The last step....covering the cushions

I feel I would be depriving ya'll if I didn't let you know the whole truth.....that right now while I sit and type this post I am enjoying the most delicious watermelon mojito. There I said it. Now we can move on to how I slipcovered my cushions. Oh and if you would like to enjoy a watermelon mojito too you can find the recipe here.
Moving on, cushions are a lot like pillows. If you've ever made a pillow cover you know they are pretty simple. If you've never made a pillow cover, you may want to start with that before you tackle a slipcover. :)
I chose to do a "pillowcase" style cover for my cushions - meaning there is an opening on one end. I secured the opening with ties. There are a million ways to secure pillow or cushion covers. On my last slipcover I did an envelope fold for the cushion. It was a pain to stuff the cushion in and out of the envelope opening, so I decided against that for my couch because these cushions are huge.
For my cushion, I just laid the cushion on top of my fabric and cut out two rectangles, giving myself about 2-3 inches extra all the way around. Then I cut one long strip of fabric for that middle piece of the cushion that holds the top cushion fabric to the bottom cushion fabric. Because I will have an opening on one side where my fabric doesn't meet, I hemmed those edges. (The pictures below doesn't show it well, but the right side is the side that will be open. You might be able to see my hemmed edges). So with all the pieces inside out, I pinned my top panel to the side piece, with my piping sandwiched in the middle. Once I sewed the top piece, I did the same thing with the bottom pieces. Make sure you pin tightly. There is nothing worse than having a big, lose cushion cover. You want it to fit nice and smooth. 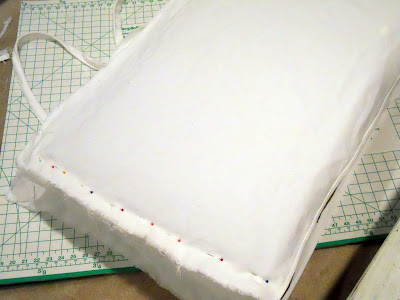 ﻿I had a lot of trouble with the cushions on my chair. Mainly because I was piping without a piping foot and because there were a lot of small corners to go around. But this cushion came out very well and I was so pleased. Everything was going great and I was trimming all my raw edges when this happened.... 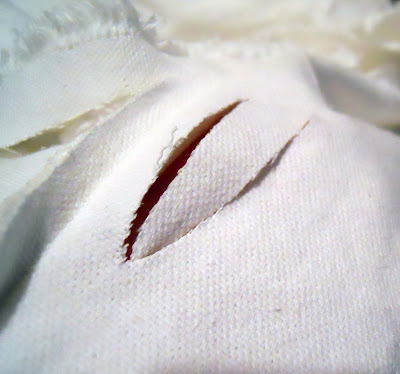 Yep, I cut a big fat hole right in the side of my cushion cover. I wanted to cry, but I thought I might wake the baby. So I didn't. The annoying part is that I did this same exact thing on my chair so I was being SO careful not to let it happen again! If this happens to you, Wonder Under is your friend. It's a fusible fabric interfacing that you iron on and then stitch over. It doesn't look pretty but it will secure the fabric so it doesn't tear worse when you wash it. Thankfully, mine was on the side of the cushion so it will never show unless someone inspects my cushions. If they do, I am claiming shark attack.﻿
So here's how it looks after I added the ties. I just used 7/8" grosgrain ribbon. I stitched the edge of each ribbon piece to the inside of the cover. When the cushion is on the couch these face the back so no one ever sees them. 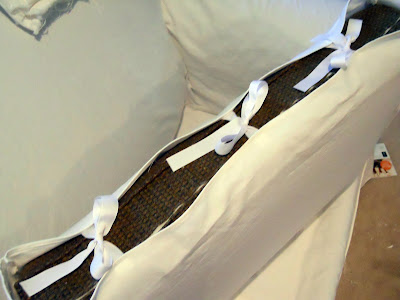 So that's all on cushions. They should be relatively simple, as long as you don't let any sharks near your fabric! ﻿:)
Tomorrow is the final reveal of my newly slipcovered couch! Make sure to stop by and check it out!
Posted by Alima at 9:55 PM

I would LOVE to hear from you! Comments, suggestions or just a simple hello are welcome! :)

Alima
Hi! Thanks so much for stopping by! I'm Alima. I'm a wife and Mom and this is my little piece of the blogworld where I post about the things I love, projects I'm working on and the other random happenings of life. I hope you hang around and enjoy!